So my buddy Elmer was down a while back for what we call "Geekend" and between video games, chili dogs, and high class beverages we maanged to get in a bunch of play time with some games. 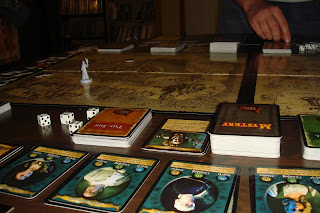 First up for the weekend was "A touch of Evil" by Flying Frog games. I really enjoy this one, along with Flying Frog's Last night on Earth. The games are chock full of photo images with live action actors and models. It gives their stuff a really nice cinematic feel. 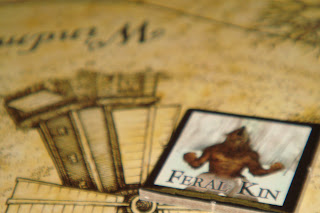 To me Touch of Evil plays like a light version of Arkham Horror. The game system runs some sort of "big bad" for the players to fight against. In this go round we combined the base game with the expanasion "Something Wicked" but we drew the werewolf monster from the base game. Good enough.
﻿ 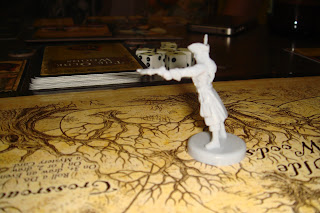 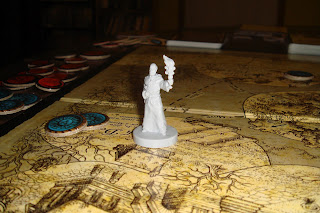 I wish I could remember all of the hilights but what I can remember included my pet dog getting killed in the woods and hordes of rats marching on the town square. Neither of us got bit by the werewolf so we didn't get to play the Werewolf hero mechanic for when the curse takes full effect. 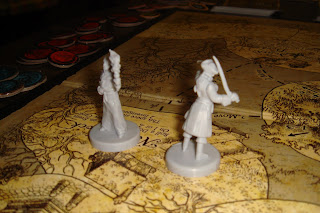 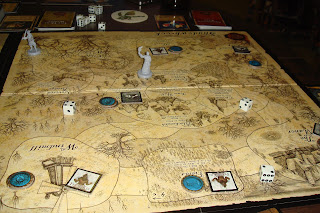 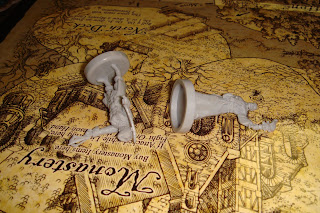 The game ended with us both having to face the Werewolf together. This is not how it normally plays out, typically one hero goes to fight the big bad at a tie but some card we pulled or table we were using pushed us into a cooperative battle. There was a good back and forth that caused Elmer to get knocked out, but the fight ended with my character sacrificing herself to kill the brute (double KO). Good stuff. Playing with the expansion adds a lot more ground to cover. It's a little much for two players we found, but it was really cool having the new locations.
Posted by Mongo at 5:08 PM