The End of an Era

Below you will find what will most likely be my last 15mm effort. I was given the opportunity to help put together a big "All-In-One 15mm Zombie kit" for the Toys For Tots Charity Gaming Auction that will be held at "Fall-In" this year. I want to thank TMP's "Moe the Great" for all the work he's doing on this auction. I can tell just from the stuff I've seen him coordinating on TMP, that he really cares about this cause. THANK YOU! And thank you for letting me be a part of it! I painted up a whole mess of survivors and "Moe" was painting up a Zombie Horde, a terrain mat, and some terrain pieces. Since I'm getting out of 15mm, on top of painting up the new stuff, I am also throwing in a bunch of pieces from my collection before I sell it all off. On top of all of that, the guys over at Iron Ivan Games donated a copy of "No More Room In Hell". Our hope is that this will be the total package for anyone wanting to get into Zombie gaming or a huge expansion for anyone who feels like they never could have enough Zombie stuff. 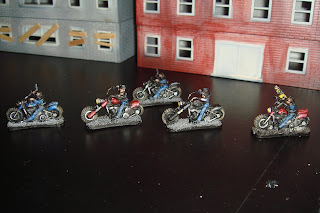 Some Rebel Minis Bikers, In fact ALL of the minis that I painted for the auction were donated by Mike at Rebel Minis. He's a good dude. Buy lots of stuff at:
http://rebelminis.com/ 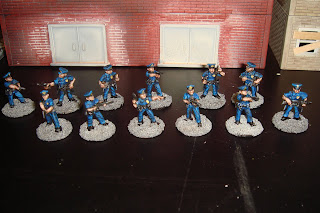 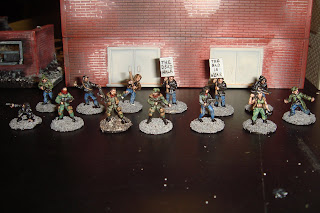 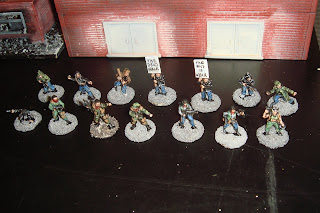 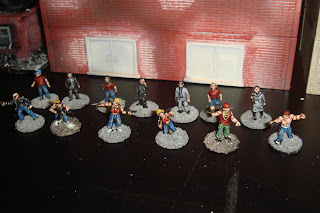 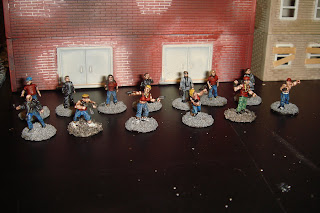 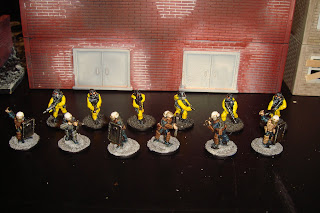 These are some guys that I had painted already from my current collection. I'm going heavy on Law Enforcement. The Zombies aren't gonna know what hit them. 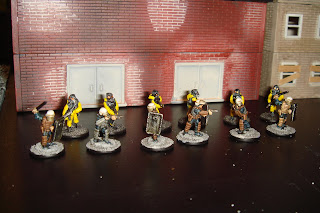 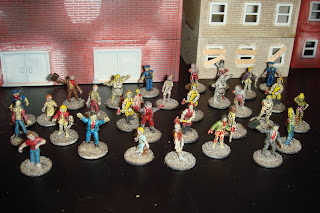 I'm throwing 30 of my zombies in the mix too. You can NEVER have too many zombies. 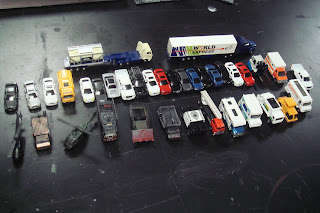 Here are vehicles to populate the city including some of my geared up zombie hunting vehicles...and a milk truck. 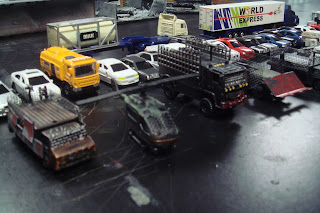 And finally the buildings that will be in the auction. So if you are at "Fall-In" this year I highly encourage to to come out and swipe up some great miniatures and help out a great cause. From the looks of it there is going to be a TON of great stuff to be had.
Below is the original call for help showing some of the great items that will be up for grabs:
http://theminiaturespage.com/boards/msg.mv?id=226282

I haven't been doing too much with miniature gaming lately. Slowly trying to finish a 15mm project. 15mm has completely lost my interest BTW. Anyway, most of my gaming lately has come in the form of board or card games. They're relatively quick, self contained, and way less labor intensive. Last week I was at the beach with the family and got some good gaming in. It's the one time of the year where I can break out some of this stuff without having to schedule a special night for the guys to come over and I love it. We just play whatever we feel like as we feel like it. 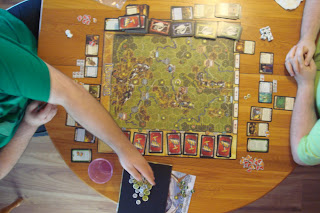 First up is Runebound. Notice those forearms, pasty white with absolutely no definition. Now those are gamers' arms. 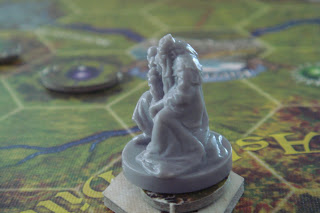 Runebound is a fun lite RPG type dungeon crawl game. Each player takes a character and explores the given map meeting various creatures and villains and leveling up until they are ready to try facing Runebound's "endgame". This varies depending on what expansion you might have in play. Above is the character I drew...in his action packed sitting position. 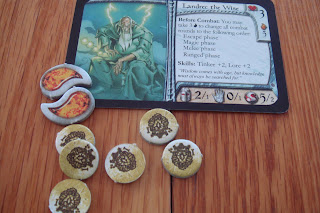 Landrec the Lazy sitting old guy should have been his name. My character was still fighting green level monsters while my brother Daniel was whomping every dragon he could find...seriously Dragons tell campfire spook tales about my brother now...true story. 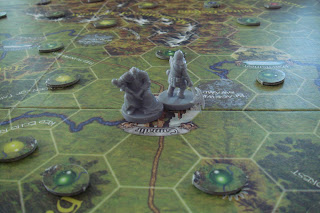 Daniel's Unstoppable Warrior of Awesome in the same town as my old guy...my old guy is taking a breather...he's old. 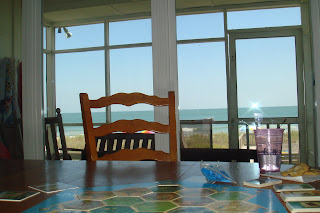 This is the view from our gaming table for the week...I don't actually like to venture outside as being a pasty white gamer ensures that I will burst into flames at the slightest contact with Earth's sun. 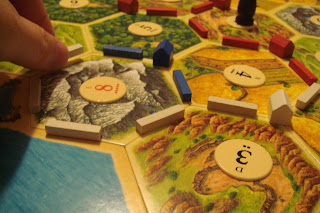 Played several rounds of Settlers of Catan with my wife Lisa and our friend Jodi. Most gamers are pretty familiar with Catan but if you're not I usually describe it to people by telling them to imagine Monopoly if Monopoly didn't suck, was constantly fun and engaging, and didn't take a Vampire's lifespan to play, and there you have Settlers of Catan. 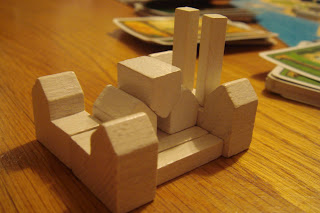 When you're getting beat you can can build fun little structures! It's like a game within a game!!! 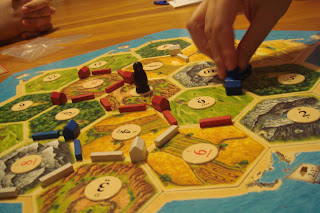 Here's a shot of Jodi cutting a path of destruction across the island. This particular round of Catan was very frustrating for me. I was working hard to get a handful of wood the whole time but all I ended up with was a handful of sheep...um...that sounds a lot dirtier than it actually is. 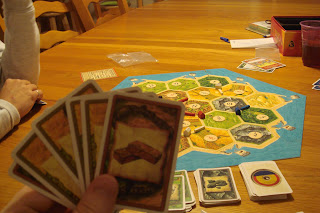 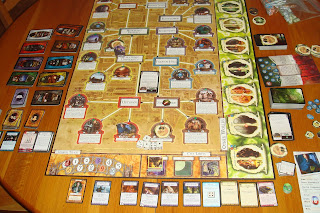 Daniel and I also managed to play some Arkham Horror. This is the Lovecraftian game of drawing cards, counting sanity tokens, and managing complicated upkeep phases. Madness is just around the corner. 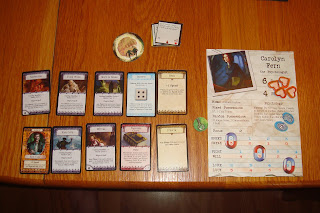 I got to play as the Psychologist...ooooh the psychologist...this was the vacation of boring characters for me. I did manage to put together a good assortment of spells though...I didn't know that psychologists were so well versed in the dark arts. 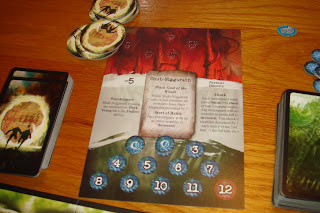 We drew Shub-Niggurath..which is just terrible. I immediately went insane after reading his game effects, like for real, in my head...where my brain lives. Arkham is pretty much the game that says "How many horrible ways can we punish the player for playing this game?" Don't get me wrong I actually really enjoy the game. You get a lot out of it as a Lovecraft fan and the punishing nature of it goes a long way in achieving the theme the game should achieve. 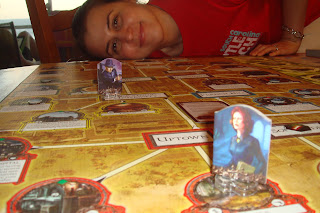 Here is my beautiful wife Lisa, oh don't be mistaken she didn't actually play Arkham Horror with us. Looking at the Shub-Niggurath card made her cry. 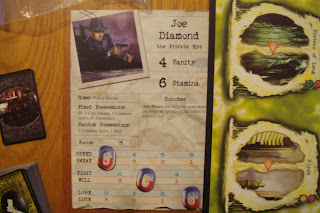 Believe it or not Daniel and I actually managed to win the game by sealing 6 gates. We never even had to fight Shub-Niggurath. That was fortunate as the beast's card pretty much reads "If you allow Shub-Niggurath to awaken and you fight him you are dead"

I didn't get pictures of everything we played but we also got a round of the deck-building game "Thunderstone" in and we played the Frozen Wastes expansion to Runebound. We had a great week. Got in lots of gaming and also did some beach stuff when my wife made me ;OP
Posted by Mongo at 6:09 PM 1 comment: