The Adventures of Shooty McGee and Captain Burglar Alarm!

The other week some of the fellas came over and we played a round of No More Room in Hell. I ran the game and let the guys play. We had four players, each player was allowed to create a Shot Caller and then roll up two other random survivors using the random survivor generator and relying on luck of the draw. In attendance were Allen the lead archivist, Bob-O, The ROshon, and Chris of the One Zed a Year blog. 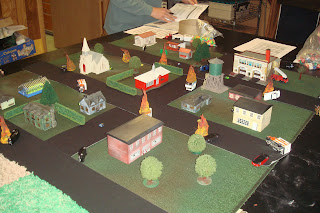 I was a little wishy washy in planning the scenario. So I made it a standard Supply Run with players earning victory points for all of the essential supplies they could find (Food, Ammo, Fuel, First Aid Kits). I also put an ultimate objective in the center of town, a little red schoolhouse where a chopper pilot was barricaded in with a bunch of kids. If a player or players could get to the kids in the school and get them and the chopper pilot to the top of the firehouse they would score an auto win. Well my lack of focus in scenario planning basically resulted in all four of my compassionate friends saying "To hell with the kids, the school is the perfect meat magnet to pull zombies away from us!" This allowed players to more safely traverse the outer rim of the table while zombies were pulled in toward the school. "Safely" is a relative term in NMRIH as the game system tends to produce more than enough zombies to go around...as it should be. 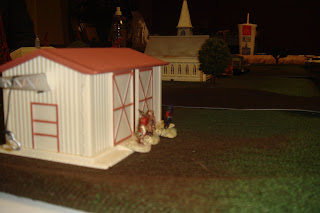 ROshon started by running all three of the Survivors in his crew up to the nearest building...and not a single one of them could figure out how to open the door. Eventually they broke in and found some weapons. 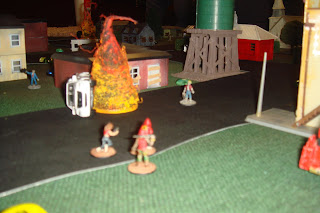 Chris quickly earned the nickname "Shooty McGee" by opening fire on anything that moved within 30 feet of his team. This also had the pleasant result of loading up the Dice Grave (The Dice Grave in No More Room In Hell is the pool of dice where shots fired dice along with dice from other encounter events on the table end up and are then rolled during the zombie turn to generate new zombies) and drawing tons of Zombies into the area, nearly every turn. 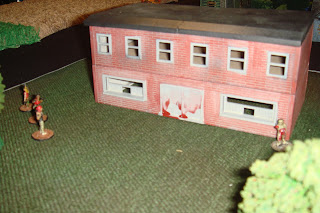 Al, being a veteran zombie game player, had his crew roll in pretty quietly, not drawing too much attention to themselves. 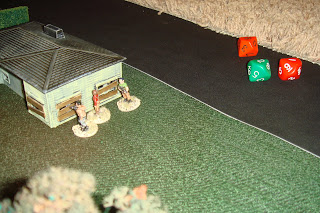 ...and then there was Bob-O imediately earning himself the nickname "Captain Burglar Alarm" when he tripped the home security system in the first house he explored, resulting in a whole buttload of extra dice being added to the Dice Grave. 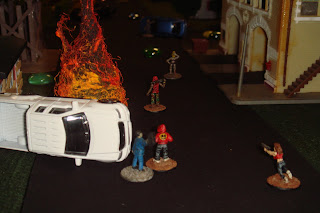 Shooty McGee continues to "Scarface" his way down Main Street while Zeds engage some of his guys in Monstrous Melee. Chris did a good job fighting them off though. 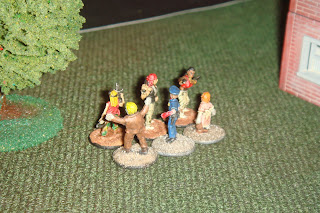 Al dispatched a few zombies of his own. 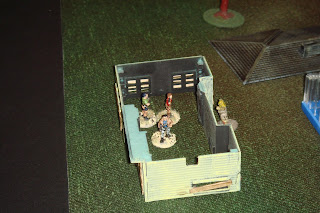 Bob-O walks into the second house he encounters and finds an old icebox full of human remains that releases a stench into the air that increases the chance of new zombies being spawned for the rest of the scenario...way to go Captain Burglar Alarm. 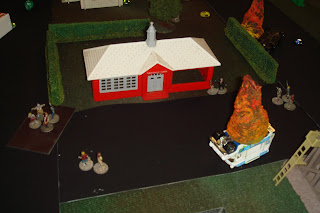 Meanwhile the children in the schoolhouse await a rescue that ain't gonna happen, and the shamblers close in...poor little bastards. 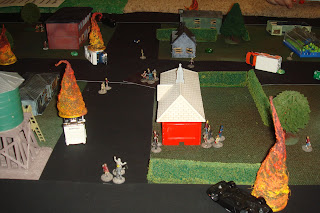 Schoolhouse is Zombie-ese for "Boxed Lunch" 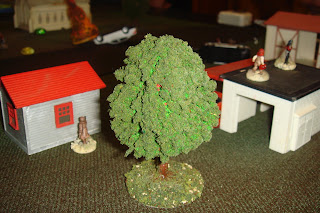 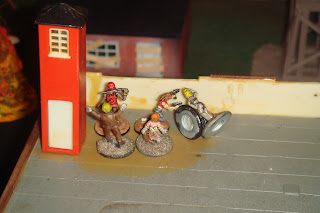 Chris sends his team to the firehouse to explore and that's when things start going south for him.. 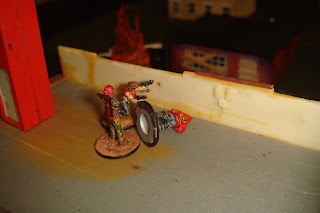 ...and he suffers his first casualty at the hands of the undead. 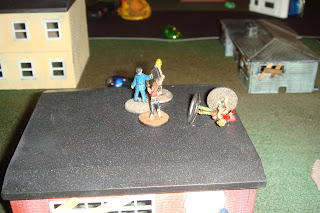 Chris manages to get his team to another building but the Zombies immediately gnosh his second survivor and take a couple bites out of his Shot Caller. 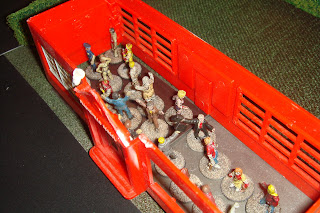 Several Hordes of Zombies form outside of the schoolhouse and eventually the barricades fail to protect the poor helpless little children. 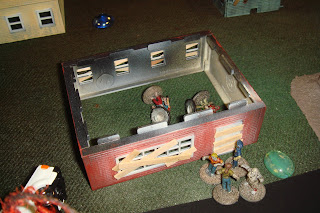 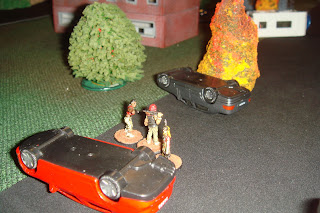 Al's team makes a quiet exit managing to secure the most essentials. 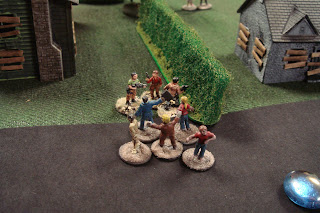 Bob's team ends with an encounter against a large group of Zombies, but manages to put them all down.
As hordes of zombies finish eating the children and start heading out towards our remaining Survivors, the game is called as the living decide to make a quick exit off the table. Al ended up taking the win with the most combined Zed kills and essential supplies found.
Chris or "Shooty McGee" did manage to get over 20 zombie kills but as his entire team had been taken out of action, the points did not count.
Overall it was a good game, it was fun and it was good for me to have a really smooth run through the system. Next time I won't put a giant zombie magnet in the middle of the table.
Posted by Mongo at 12:57 PM 5 comments:

This is my BOOMSTICK!!!

I just finished up a batch of some Studio Miniatures zombie survivors. I did a few for some friends as late Christmas gifts, but I kept this one for myself. This the "Cole" miniature who bears a striking resemblance to the a certain big chinned Candarian demon killer. These miniatures were a blast to paint, probably the nicest I've ever painted. I have started picking up more 28mm stuff lately, especially a bunch of Reaper's new zombie survivors from the Chronoscope line. I'm having trouble focusing on 15mm right now. 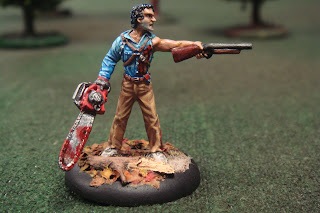 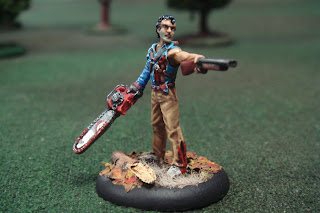 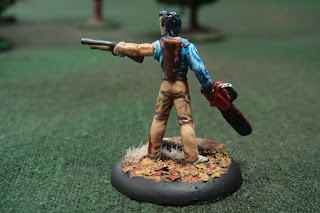 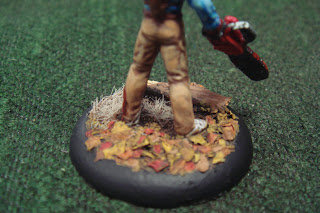 I always wanted to try doing a fall foliage basing and found a great website that suggested using oregano. Loving to cook, but not being overly adventurous with spices I found our oregano still had the original seal on it. So here we go. I really like the effect. 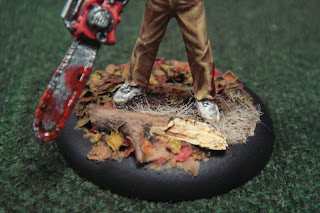