Don't be too proud of this technological terror you've constructed

Tonight my brother and a couple of his friends came over and we broke in my Death Star Table. The table is not quite finished yet, I have some detailing to do and some warping issues with the cheap foam core I used that I'd like to work out. It was good enough to play on though so we gave it a shot. We just played a regular dogfight since I haven't worked out all the trench run and turret rules yet. 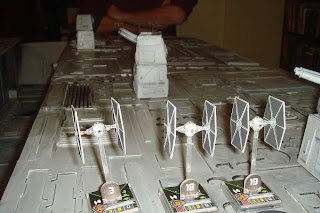 Dan and I played Empire 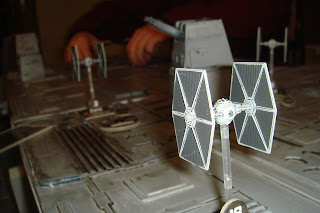 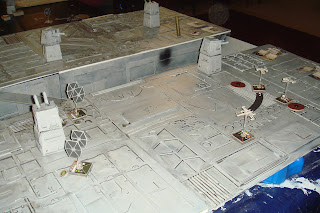 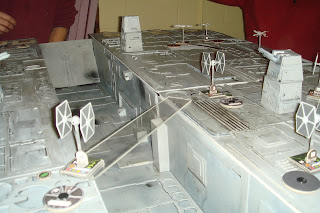 Dan deployed Darth Vader and his wingman on the opposite side of the trench and had to make his way over to the fray. 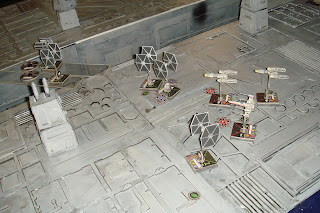 It took us about 3 turns before we were all in firing position. 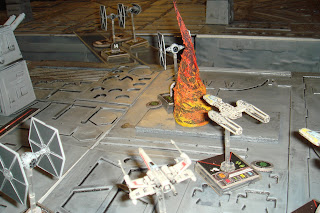 ...and they wasted no time taking out my Backstabber TIE. Fire doesn't burn in space, but it does burn in my mancave. 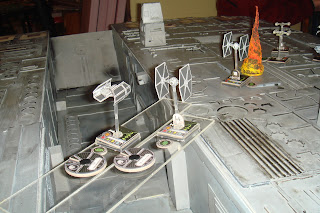 Dan, gingerly traveling over to help. 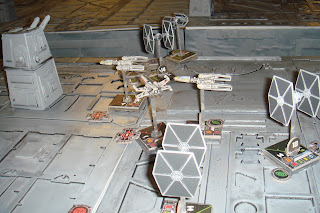 The Rebels, played by Nicholas, the Strongest Boy Alive and his friend "Fish" if that is his real name. They went with one X-Wing and two Y-wings. I thought that was an interesting combo. They were were all decked out with astromechs and ion turrets. 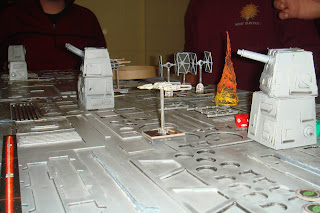 Nick and Fish really did a pretty good job of utilizing the ion turrets often stayinrg out of our firing arc and whittling away at our TIEs with their 360 degree firing arc. 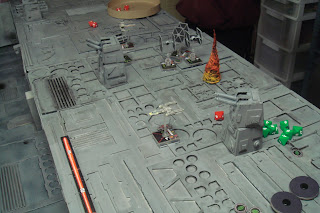 Dan and I kept rolling criticals like nobody's business, bypassing the shields of the Y-Wings and crippling them a lot faster than they normally would be....(this is what we will call a 'house rule'....meaning that I misinterpreted the rules and made everyone just go with it, 'cause I it's my game) 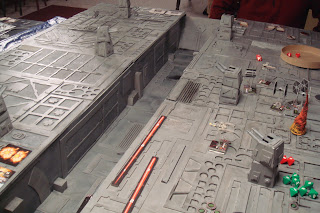 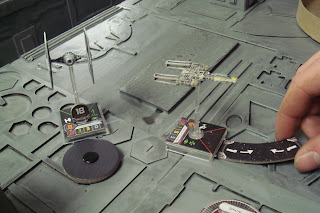 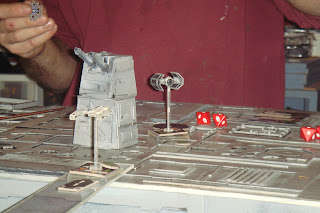 It was another good battle. It came down to Vader and one Y-Wing... 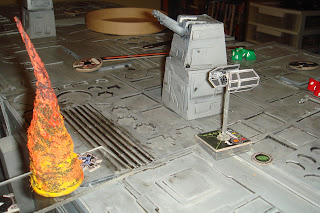 ...of course we all knew how that was gonna go.

I'll say it again, I love this game. It really is a blast and there is a great back and forth that keeps things interesting the whole time. You never feel like one side is ever rolling over the other. Another fun game in the bag.

On Friday night we had another one of our monthly game nights and we got to break out X-wing. We ended up having 8 people all together so we split up and played on two tables thinking that 8 players on one table might bog down the game. I had enough stuff to field two 100 point battles....with some ships left over. This tells me that I've spent far too much money on this game already. 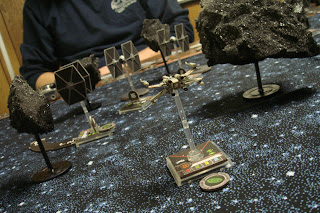 On table one (numbered as such, simply because it was the table I was on) we had a dogfight in an asteroid field between Wedge Antilles and a small faction of Red Squadron taking on Darth Vader and several TIE fighters. 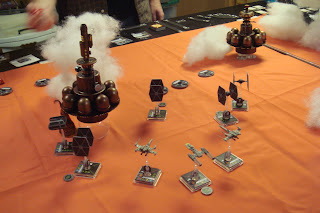 Table two saw an atmospheric battle in which the Rebels, led by Luke Skywalker were tasked with destroying three atmospheric mining refineries. 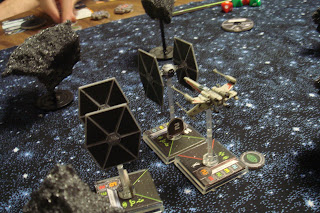 We engaged pretty rapidly on the first table and were doing a nice job of picking off TIE Fighters. 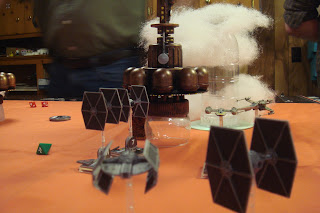 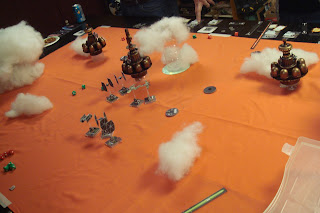 Things went very badly for the Rebels on table two. They used their 100pts. to really power load 3 fighters and then went up the middle in a tight cluster. The Imperials took that opportunity to pincer in from each side  bringing a lot of firepower and lighting them up. 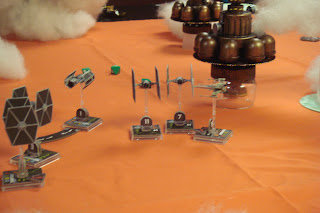 Luke ended up all by lonesome real fast. 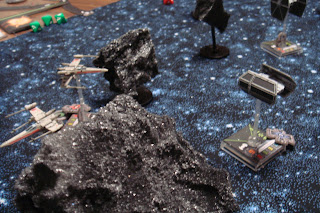 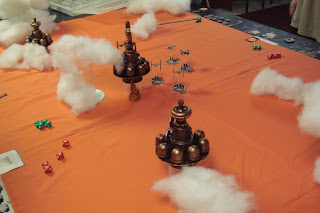 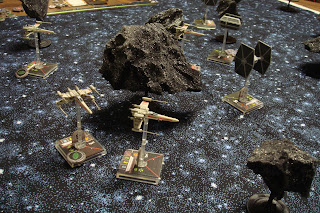 After managing to destroy all the TIEs on the left side of the table all of our X-Wings started to cautiously make their way over to engage Lord Vader. 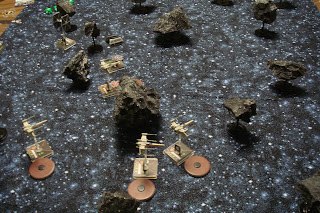 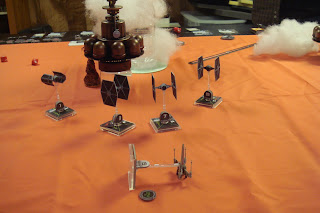 On the Asteroid table we ended up bringing all four of our X-Wings into firing position on Darth Vader, but it was the Rookie Pilot that ended up taking him out which was a fun way to end things.

Table two's Rebels really should have been given enough extra points to buy at least one more fighter, since they had to divide their fire between fighting and bombing, but all reports indicate that they also should have spread out and focused on the refineries rather than going up the middle and engaging the Imperial fighters. Hard lessons learned.

A good time was had by all. We changed the history of the Star Wars Universe on both tables by killing both Luke and Vader, so I'd say that it was a productive evening.
Posted by Mongo at 3:10 PM 4 comments: