So several weeks back my good buddy Doctor Merkury convinced me to go see a live Pro Wrestling event that was put on by an independent promotion called the SWO. I have not been to a live wrestling event in probably 15 years. We had an absolute blast and we started talking about gaming pro wrestling. I still own my copy of the old "WWF Adventure Game" from the early 90's which is a pen and paper rpg game. I remember it being a lot of fun so I set out to try and find some affordable figures. Luckily a company called Jakks makes these generic "Pro Wrestling Ring Starz" which use a lot of the same molds the company used when they were making the WWE "Micro Agression" line. 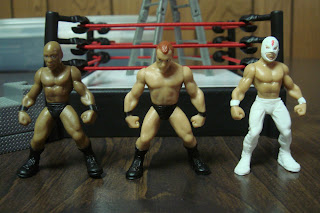 They make a 20 pack of these 2inch figures that comes with 20 Wrestlers, a ring, an d several weapons and props. I scored a couple of these for $15 a piece and was pretty jazzed. What you see above are the only three sculpts the set offers though, with only variations in paint jobs. So, I got out my Pro-Create sculpting compound to try and make some of these guys look unique. I'm a crap sculptor, but I'm pretty happy with the modifications and paint jobs so far. I used Fusion primer and I'm hoping the paint holds on these as they are gonna take more positioning and posing than your typical wargaming miniature. I also didn't really bother much with shading and detailing on these guys. 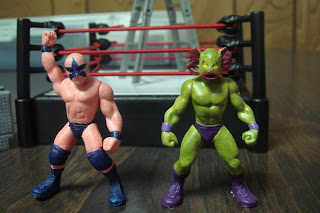 These first two are a tribute to two of the memorable characters from the old 8-Bit Nintendo "Pro Wrestling" game. Starman vs. The Amazon. Head Bite anyone? 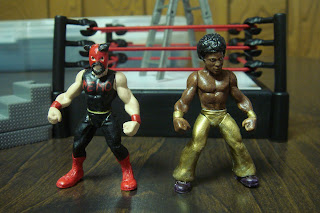 These are wrestling versions of my friends Jayson and Todd. Todd is the black one. 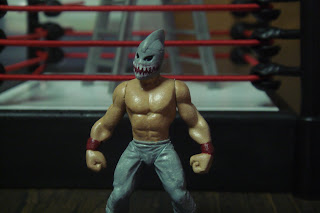 This is a guy I made up called SharkBite. As soon as I painted the teeth I was in love with this story and was totally off and running conducting a back story for him. 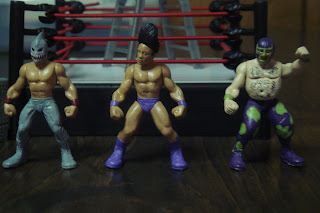 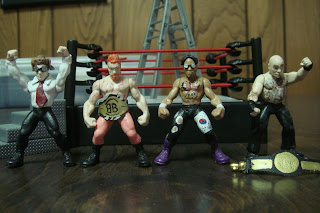 These four are my buddies' and my characters that we made for the one wrestling video game we play. Elmer, Seth, Dave Mysterio, and Mongo. There's also a look at the little championship belts I made for these guys. More of those to come. 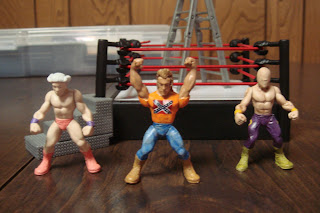 Some more characters The Dandy, Alabama Sam, The Enigma.

I'm really excited about playing this. There will be more to follow.
Posted by Mongo at 6:28 PM 8 comments: