In space no one can hear your reaction to Disney buying Lucasfilm...

So I pulled the trigger on buying a bunch of the new Fantasy Flight X-wing stuff and tonight at my wife's family Thanksgiving dinner we got to fire it up for the first time. The players were my brother and our cousin chase on the Empire side and cousin Cody and I as the Rebels. 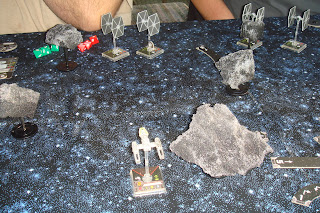 We played 50 pts. on each team and we thought for certain that Dan and Chase were going to bring out Darth Vader but instead they laid out 3 Academy Pilots and a Black Squadron pilot all in standard TIE Fighters to take on Cody as Luke Skywalker and me as a Gold Squadron Y-Wing. 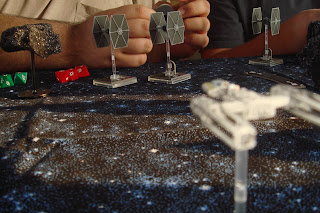 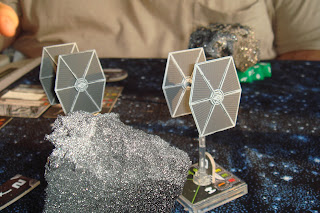 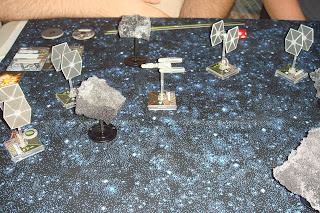 ...this mess. Dan's two TIEs both pulled Koiogran turns so my keen Mongo piloting skills landed me in this spot with three TIEs' guns trained on me. 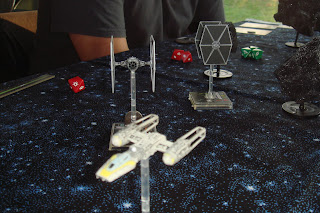 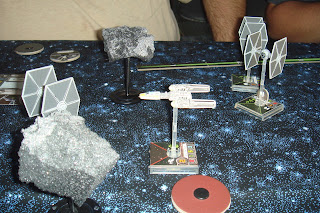 I couldn't land any shots but luckily my Y-Wing wasn't taking too much damage. Somewhere in the distance Luke was considering whether or not to join the fight. 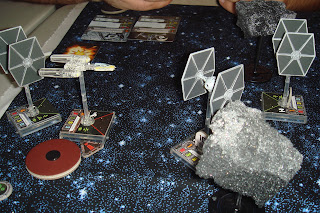 I pulled off my own Koiogran turn and managed to get into a little bit better of a position. Our point build didn't allow me to take Ion Cannons unfortunately which I understand to be the real bread and butter of the Y-Wings. 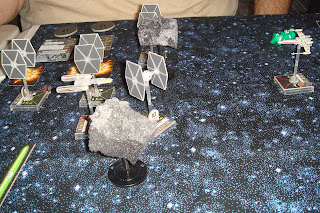 Hey look Luke decided to show up for the party. I'm glad he did, because that's when the chipping away at the TIE's finally began....no thanks to me and my Y-Wing. 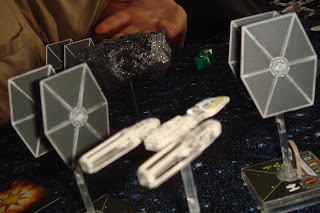 Behold the mini-van of starfigher combat. With 3 shields and 5 Hull strength the Y-Wing can take a real beating though. Another handy thing was the ability to move 1 straight length. That threw the TIE's for a loop a number of times as they would fly right past me and into my firing arc. I was like the little Y-Wing that could. 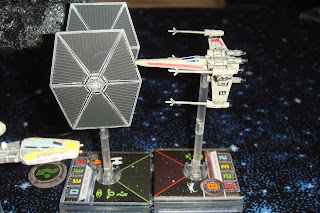 Luke and a TIE have an "in space" stare down. 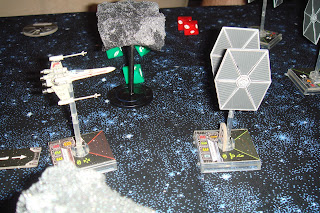 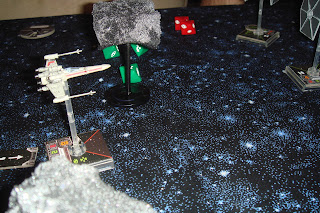 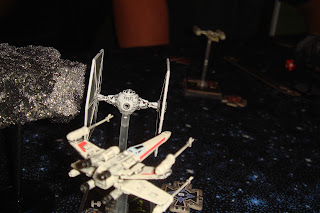 It worked out well for us, as the  Empire pretty much decided they would consider it a moral victory if they could just take out my Y-Wing. So while I gingerly drifted through space taking a harder beating than Andy Dufresne took from "The Sisters" in the Shawshank Redemption, Luke was able to go around sweeping up the TIE's one by one. 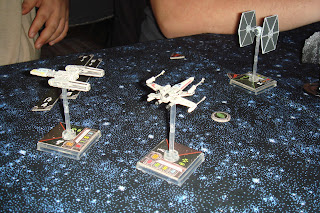 Luke taking out the final TIE, while I limp away from the battle with 1 single Hull point remaining. 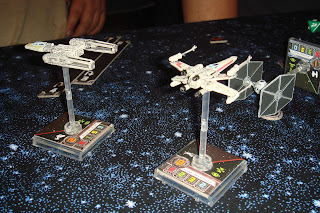 It's cool, I had Luke tow me back to base.

I got to say this game is fun. It's just fun. The weaving in and out of the other starfighters just really worked for me. This was pretty light in that we were using 4 players and only 50pts. a side, so I really can't wait to break it open with more ships and  power-up options. The game is definitely an investment, but if you approach it with the mindset of a miniature tabletop gamer, it ends up looking a lot more reasonable.