“I Fell Into a Burning Ring of Fire”

In this scenario Fire has claimed 2 buildings already and is spreading down both sides of the street.
Setup: Line two sides of a street with buildings. At one end of the street place a ruined building on both sides of the street. Place various vehicles along the street as well. Place civillian miniatures in all the buildings along the street.
Heroes are here to rescue as many civillians from the flames as possible. Villians are here to hinder them as much as possible by blowing up cars or simply disabling the heroes via combat. It is a good idea to have the heroes outnumber the villians by a coupl of models, there is a lot of work to be done.

Fire is spread or put out in the following ways: 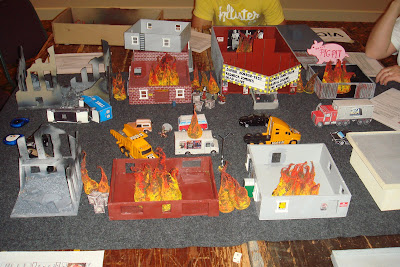 Heroes- If a Hero Player wins the initiative roll they are allowed to remove 1 small sized fire marker from the board for each Initiative goal rolled above the highest Villain Initiative roll. These markers can be removed from anywhere the Hero player chooses. 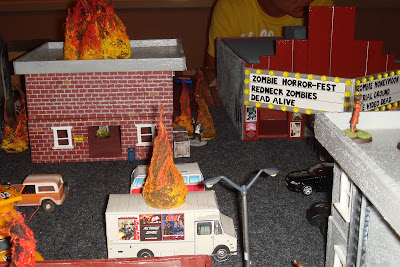 At anytime during the scenario if a vehicle is ‘wrecked’ it is considered destroyed and generates a new fire marker on top of it where the vehicle lies. For placement of new fire markers the new marker can be touching any part of the wrecked vehicle to be considered adjacent.

A vehicle is also considered ‘wrecked’ if it is successfully thrown.

A flaming ‘wrecked’ vehicle can still be used normally as a weapon. ‘Wrecked’ merely means it will no longer function well for its intended purpose. 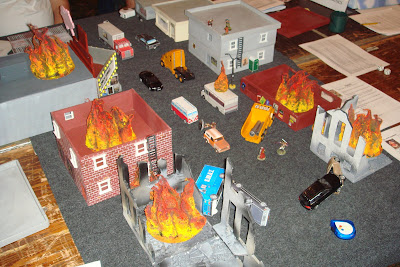 BURNING DOWN THE HOUSE
When a building is touched by newly generated fire markers the new markers are placed on top of the building’s roof. The building becomes ‘engulfed in flames after the 3rd Fire marker has been placed. Replace all smaller fire markers on the building with an Inferno marker. Each subsequent turn from when the inferno starts the Inferno will ‘Burn Through’ the floor below. The Inferno remains in place once it reaches the first floor of a building.
Eg. At the start of the turn following the generation of an Inferno remove the roof of the building place the inferno on the floor below, at the start of the turn after that, remove that building story and place the inferno on the floor below.

Any Civilians on a floor that is “Burnt Through” are immediately lost.

Roll 1D6 for any Civilians on the floor that is being burnt down to. On a result of a 1,2, or 3 are immediately lost. Any Civilian rolling a 4,5, or 6 are place to the edge of the building and considered to be screaming out the windows for help. Any heroes in this situation automatically jump out of the way to the edge of the flames.

Any character on the floor of a building that is “Burnt Through” immediately take a STRENGTH 6 hit resolved normally using the character’s Damage Resistance pool.
Any hero KO’d in this way is considered ‘Coup De Graced’ and will have to roll on the ‘Coup de grace’ table after the scenario is finished subtracting 2 goals from his/her resolve roll. 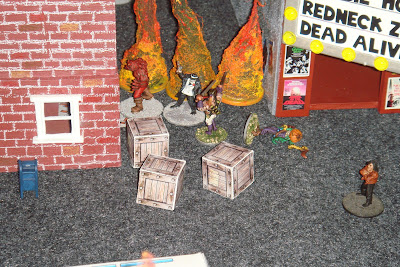 FIRE BAD!!!!!
Any character coming into contact with a fire or inferno template for any reason (thrown, knock back, fire generated on top of, etc.) takes an immediate strength 4 hit.
Any hero KO’d in this way is considered ‘Coup De Graced’ and will have to roll on the ‘Coup de grace’ table after the scenario is finished subtracting 2 goals from his/her resolve roll.

Roll 1D6 for any Civilians touched by a fire template. On a result of a 1,2, or 3 are immediately lost. Any Civilian rolling a 4,5, or 6 are considered to have jumped out of the way and placed 1” from the edge of the fire template on the side that they were closest to. 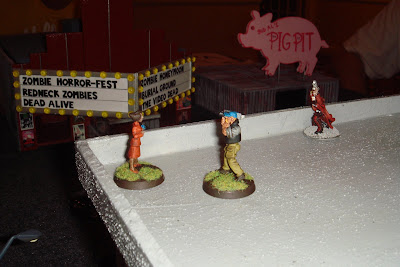 HERE I COME TO SAVE THE DAAAAY!!!!!!!
Heroes have the chance to earn extra experience in this scenario by rescuing civilians trapped in the burning buildings. All heroes are considered able to carry on civilian at a time unless possessing an ability that states otherwise.

Heroes earn +1 scenario XP for each person successfully carried out to the street.
Villains may negate this experience and earn +1 XP by carrying a rescued victim back into the burning building if they are feeling so nasty.


BACKDRAFT
The battle ends once one side is defeated. Experience earned from saving people can only be earned while the battle is still taking place (it’s easy for a hero to run into a building to save someone if he’s not getting shot at).

The Heroes arrive on the scene with the intention of saving as many civies as possible all the while fighting off the advancing villains.
Any Hero still standing at the end of the battle earns +2 XP
Any Hero that is out of action at the end of the scenario earns 1 XP

Any character that was taken out of action by coming into contact with fire or falling through a floor when it is “Burnt Through” subtract 2 goals from their resolve roll when rolling on the after scenario table.